These special encounters with strangers. A dialogue on a train, in a bar or in the streets. You share one rare moment of closeness with a stranger. Then you separate for good. Sometimes sad, sometimes relieved never to meet him again. But you'll never forget. An epiphany.

When people die in a road accident sometimes their family or friends erect a small wooden cross along the road where it took place. As a memorial for the dead and a warning for other drivers. The crosses bear the name and the dates. Most of the bemoaned died young. Sometimes there are also flowers or candles round the cross.

I take pictures of these crosses when I pass one. Media in vita in morte sumus.

One day I stopped by a cross which indicated the place where a 18-year-old man died. During the shot a woman, who stood at the other side of the road in one of these little booths where they sell asparagus, later strawberries in the summer, addressed me:

"Are you the photographer?"
"Which photographer?"
"The one that took pictures here last year, for a book."
"No, that's not me."
She paused, then, in a sharp voice "Why do you take a picture of this cross?"
Me, with growing impatience "Why do you want to know?"
"Because this is my son's cross."

It struck me a blow. I fell silent, ashamed of my aloofness. She said, half to herself: "He was killed by a car. The driver became aware of him when it was too late, it was dark, he cycled along this road ... I stay here every summer, just across the place where he died. Maybe that's weird, but I feel near to him by doing this ... I hoped you were this photographer. She promised me to inform me when the book is published, so I can buy it. But she never called me. I searched for the book but I never found it, no bookseller could help me."

After some investigation I found out that the book was never published, it was an abandoned plan. I informed her via the e-mail she had given me, but never received an answer. 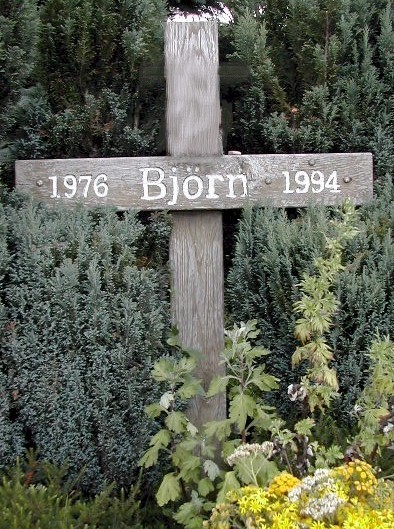 To stay near the place where one's most beloved was killed.
A spell for both of them, mother and son.