Death & the dead always interested me. Remember the boy Smut, who celebrates violent deaths with fireworks in Greenaway's Drowning by Numbers.

I never saw a dead human body, they vanish from the scene nowadays, in our culture. I did not see my parents after their death, although I wanted to, but it became unusual to lay the corpses out before the funeral.

So I contemplate over Morgue photos of Andres Serrano, Jeffrey Silverthorne and others. I visited the catacombs of the Capuchins in Palermo, a library of thousands of corpses, arranged according to their sex, age and social class. I collect children's picture books on death, there are some great works among them, like Wolfgang Erlbruchs Ente, Tod und Tulpe (Duck, Death and the Tulip).

No celebration with fireworks, but some pictures I took as a memorial for the violent deaths of creatures like this one of a hare: 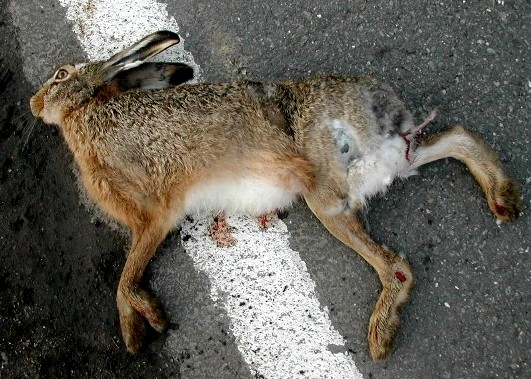 The Endgame
This is the best game of all because the winner is also the loser and the judge's decision is always final.
Peter Greenaway, Drowning by Numbers